iRobot Roomba 614 is an entry-level robotic vacuum cleaner, which means it doesn’t have advanced features. However, it does well with its main function – cleaning. It’s a good choice if you have a limited budget and don’t mind running it every day by pressing the button on the robot.

iRobot Roomba 614 is round, 13.4 inches in diameter, and made of black plastic. In the center of the faceplate, it has a big round Clean / Power button, which illuminates when the robot is on. The Clean button is surrounded by Spot and Dock buttons. 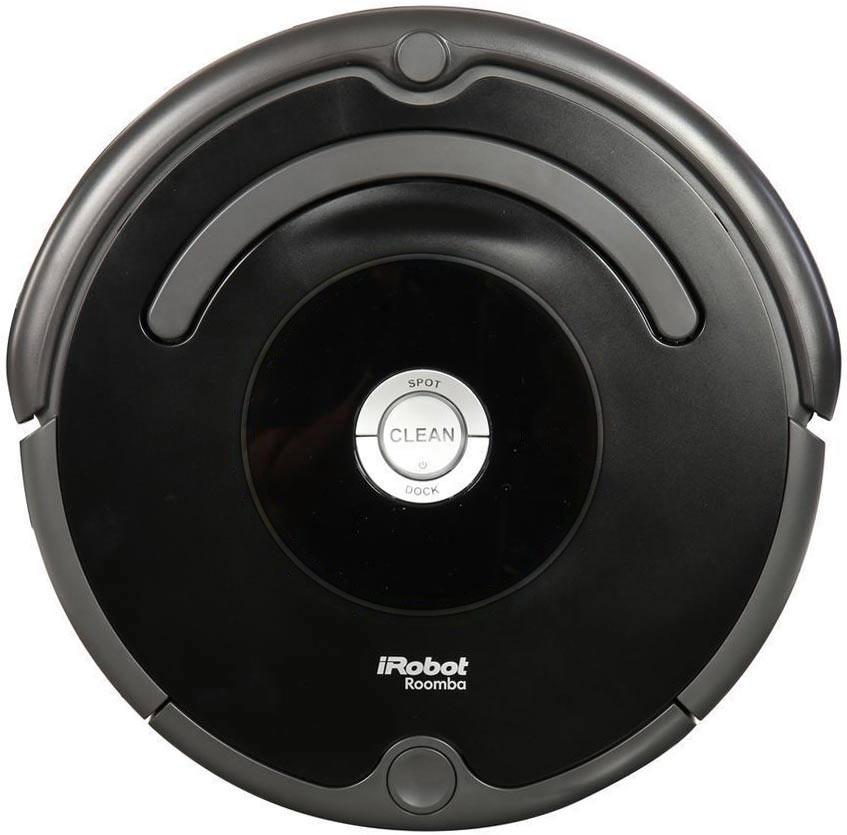 Over thes buttons, there is a battery indicator. Over the indicator, there is a rounded handle for carrying the robot.

The front part of the robot is covered with a bumper, which moves on springs and serves as a touch sensor. On top of that, there is a protruding RCON (room confinement) sensor, which is used to locate the home base.

The rear part of the robot is occupied by a dustbin with a release button on the top and an exhaust grille on the back.

On the bottom of the robot, you will find two roller brushes in a cleaning head that can raise or lower a little to keep the brushes close to the surface, according to the different types of flooring. 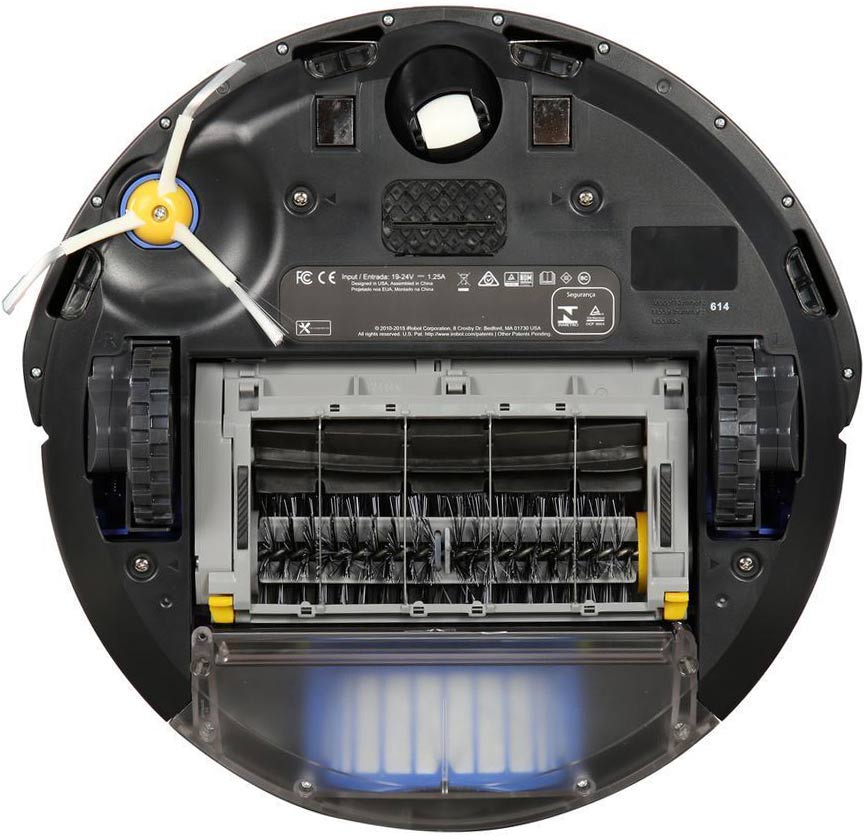 On both sides of the cleaning head, there are two large drive wheels, which also can go up and down to allow the robot to go over uneven surfaces.

At the front, there is a small non-driven caster wheel, which can freely spin 360 degrees. On either side of this is a charging plate.

Over the right wheel, there is a side brush. On the perimeter of the front part, there are four cliff sensors.

The robot is 3.6 inches high, which should enable it to clean under most of your furniture. It weighs 7.5 pounds, but since it was created to drive through your home on its own, you won’t be troubled with carrying it manually.

The Roomba 614 does a fair job at cleaning pet hair, cat litter and other dirt on hard floors and low carpets. On high-pile carpets, it’s not very effective.

The suction power is rather low for effectively sucking the dust directly from the floor, so the robot mostly sweeps floors with the side and roller brushes, and mainly uses the vacuum to transfer the dirt from the roller brushes into the dustbin. The fact that the bristled roller brush is very close to the dustbin intake makes this easier to do; as the brush practically throws the dirt into the bin.

Due to its round shape and narrow cleaning path — only 7 inches wide— located in the middle of the robot, it relies solely on the side brush when cleaning along the walls and in the corners. It can clean along the walls, but cannot fully get into the corners.

The Roomba 614 has dual roller brushes, which rotate towards each other to agitate the dirt on the floor and move it towards the vacuuming bin. The larger brush has bristles and the smaller second brush has rubber blades with gaps in between them.

The cleaning head that houses the brushes is adjustable, so they are always close to the flooring for optimal cleaning performance.

The roller brushes get tangled quite easily with hair and should be periodically cleaned. The robot comes with a flat tool for this purpose. 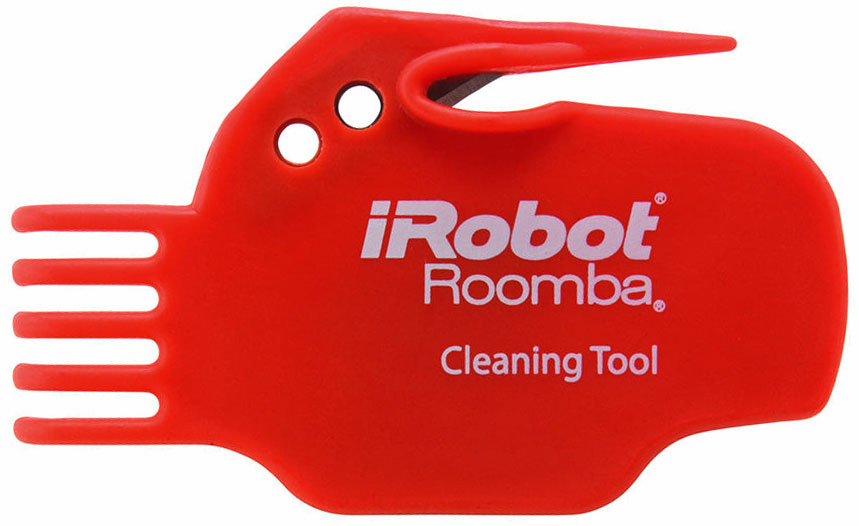 The robot has anti-tangle system; if the robot is tangled on a rugs fringe or phone cord, it will try to release itself by reversing the roller brushes. Sometimes this works, but it’s still not advised to run the Roomba 614 in cluttered rooms.

The Roomba 614 is noisy. Not as noisy as a traditional vacuum, but still it’s hard to watch TV in the same room, for example.

The Roomba 614 utilizes iAdapt random navigation with dirt detection and edge-following patterns. It can miss some spots and clean some areas multiple times in a single cleaning cycle, so it should be run daily to equally cover the whole area.

The robot spends most of the time randomly bouncing between walls and furniture in the room. Sometimes, when it meets a wall or large obstacle on the right, where the side brush is, it follows the wall for some time to clean along it with the side brush, then returns to its random routine.

It also features dirt detect series 1, which uses an acoustic sensor to detect particularly dirty spots. When the dirt is detected, the Roomba 614 will make circles around the dirty area until it’s clean. This is a very good addition to the random navigation, which greatly improves the cleaning result.

Since the robot doesn’t keep track of what areas it has already cleaned and what areas it hasn’t, the robot can work multiple times over the same areas while leaving other areas unattended. However, if you run it daily, it will eventually get the missed spots and keep all the floors clean.

Return to the charging dock

In the end of the cleaning cycle or if the battery runs low, the Roomba 614 will return to its home base for recharging. 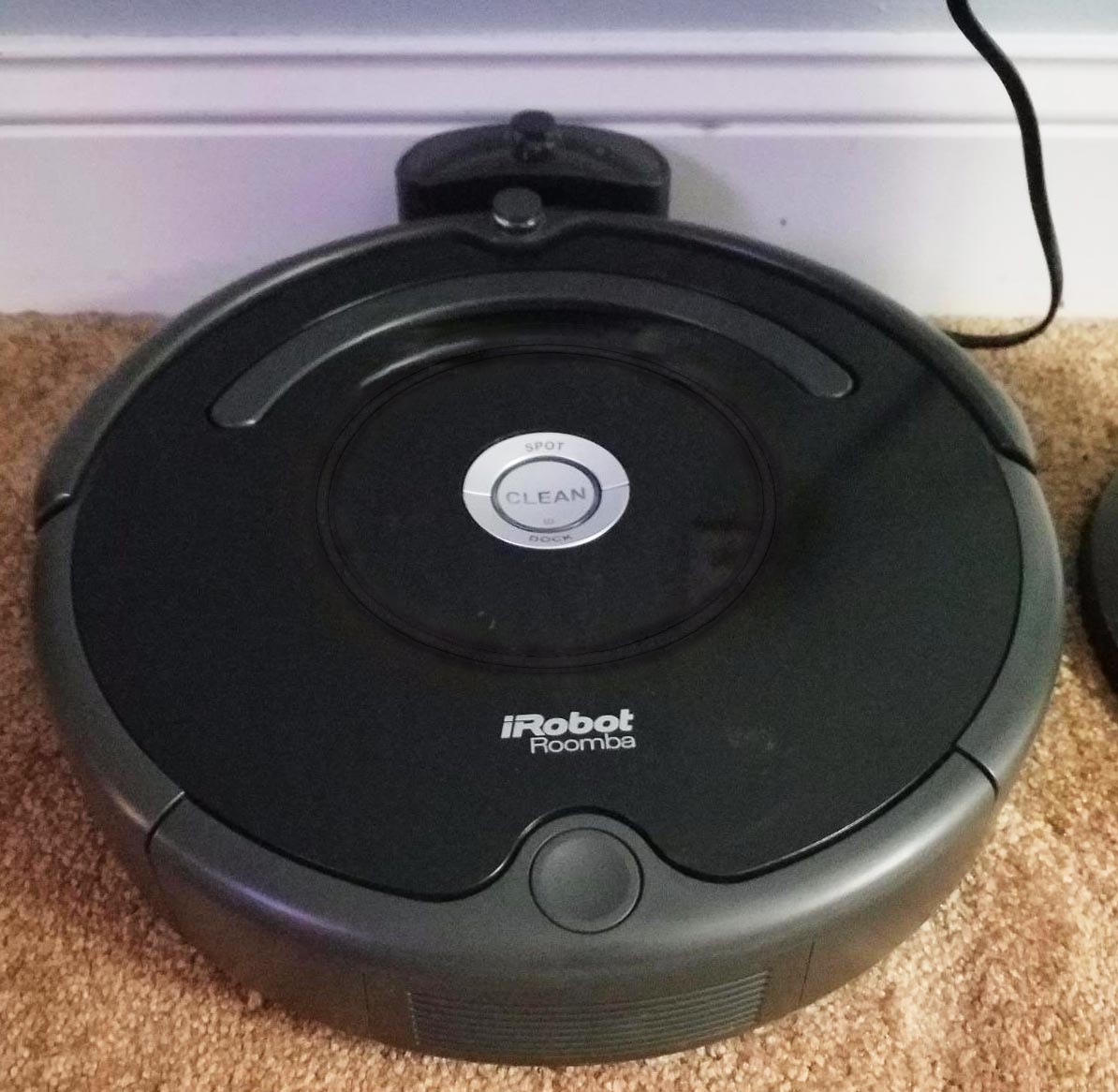 As the robot doesn’t “know” where the home base is, it requires a line of plain sight to detect it with the RCON sensor on its top. To increase the chances of a successful return, the charging dock should be placed flat against the wall in an uncluttered area, with at least 1.5 feet of free space to both sides of it and four feet in front.

Generally, the Roomba 614 makes its way back to dock successfully, but if you have a complicated layout with lots of furniture, it can get lost.

Due to its random navigation, the Roomba 614 cleans best if run in a single room or in an apartment with an open floor plan. You can run it in multiple rooms, but it will most likely clean one of the rooms better than others. In addition, if it is not in the same room with the dock at the end of a cleaning cycle or when the battery runs low, it may not find its way home.

If you want to clean a multi-room apartment thoroughly, you can block off rooms. For example, shut the doors and do one room at a time.

During the cleaning cycle, the robot estimates the room size based on distances between bumps, and defines the estimated cleaning time.

The maximum length of the cleaning cycle is 60 minutes, which matches the estimated runtime on a full battery charge. This is enough to clean approximately 1000 square feet.

You can certainly run it in a larger apartment; it will miss more spots, but if run daily it will still be quite effective.

If you run it in a small room, the robot will finish cleaning more quickly, depending on the estimated room size.

The Roomba 614 has four cliff sensors and they really work well, so it shouldn’t fall down the stairs.

The bad news is that the cliff sensors recognize black surfaces as a drop and won’t allow the robot to go over them. Therefore, if you have black or very dark rugs or tiles, the Roomba 614 most probably won’t clean them.

Ability to go over moldings and carpets

The Roomba 614 has no trouble transitioning back and forth from hard floors to most carpets, if they are not black. It can climb on a threshold up approximately 5/8 of an inch high.

Under furniture, and between furniture legs

Being 3.6 inches high, the Roomba 614 goes under most furniture and therefore can clean areas where people rarely get when cleaning with a traditional vacuum. However, if you have furniture with clearance close to the robot’s height, it can try to go under and then get stuck under it, mostly being caught on the protruding RCON sensor.

The robot tries to avoid obstacles; however, it can bump into narrow things like furniture legs. Due to the soft front bumper, it doesn’t hurt furniture.

If you have many tables and couches, it can spend some time bouncing back and forth between them, but eventually it’ll find its way out.

You can run the Roomba 614 in spot cleaning mode to clean an area of concentrated dirt. After you place it on top of the dirty spot and press the button, it will operate in a spiral, first outwards and then back inwards to its original position, cleaning a round area approximately 3 feet in diameter.

It takes about 3 hours to get a full charge. After the full charge, the robot should stay in the dock, to be ready for cleaning whenever you need it.

The Roomba 614 can be controlled solely with the buttons on the robot itself. It neither has a remote control, nor can it be scheduled.

Buttons on the robot

Using the three buttons on the robot you can start / pause it, run in a spot mode or send it home.

The Roomba 614 is compatible with dual mode virtual wall barriers, which restrict the robot from accessing the areas you don’t want to clean; however, it doesn’t include them in the basic package. You can buy them separately, but if you spend money for a virtual wall, the total sum will be close to or exceed the price of the Roomba 690, which already has one virtual wall in the package, and can also be controlled with the smartphone app.

Even though the robot has an anti-tangle system, it still can be caught on a sock or cord on the floor. To help the robot do its job seamlessly, it’s better to make sure you have nothing on your floors that can be sucked up.

In addition, it’s a good idea to close off areas where it can get stuck, for example, under the furniture of the same height as the robot.

The Roomba 614 has an AeroVac dustbin with a vacuuming motor and fan inside. 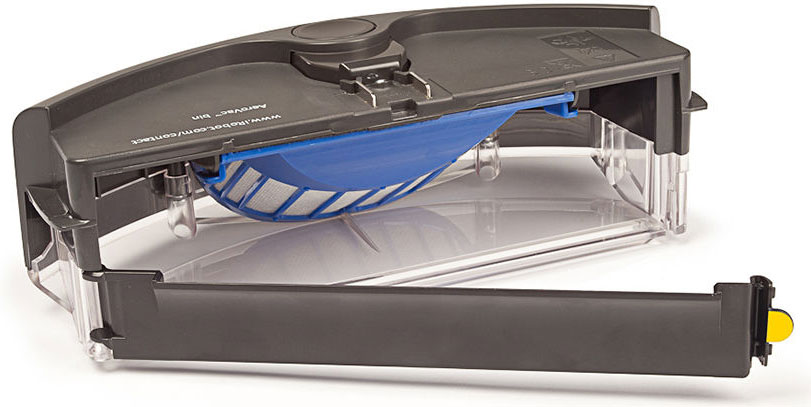 The dustb capacity is 0.48 liters, and unless you run the robot in the freshly-cleaned home, it will be full with dirt and fuzz after each cleaning cycle.

The Roomba 614 has an ordinary filter inside the dustbin, which should be cleaned regularly. 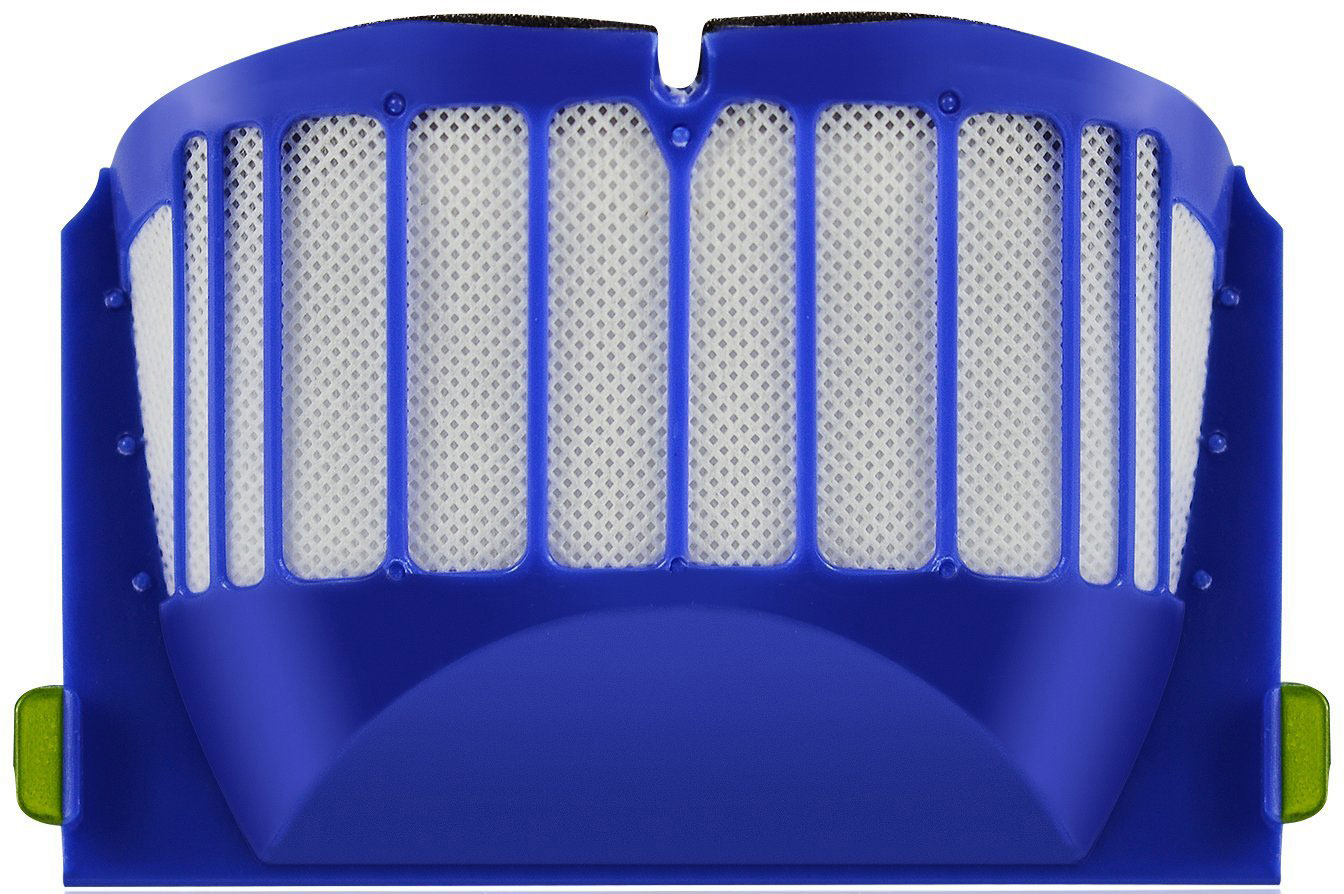 After some time the filter should be replaced. The robot comes with one spare filter in the package.

Emptying the dustbin is easy. Just press the button to release it, place over the trashcan and open the bin door.

After removing the filter from the bin, you can tap it against the trashcan or vacuum it out with a traditional vacuum.

The roller brushes, side brush, caster wheel and contacts also should be cleaned from time to time. The side brush can eventually wear off and should be replaced.

If the battery doesn’t provide enough cleaning time after the robot has been in use, it can be replaced by unscrewing the four screws and removing the whole bottom cover of the robot. You can replace the battery with the same model, or upgrade to bigger battery 14.4V 3300mAh = 47.5Wh, which will provide almost two hours of cleaning. One cleaning cycle will still be a maximum of 60 minutes, but you will be able to run two cycles subsequently without recharging.

What’s in the box 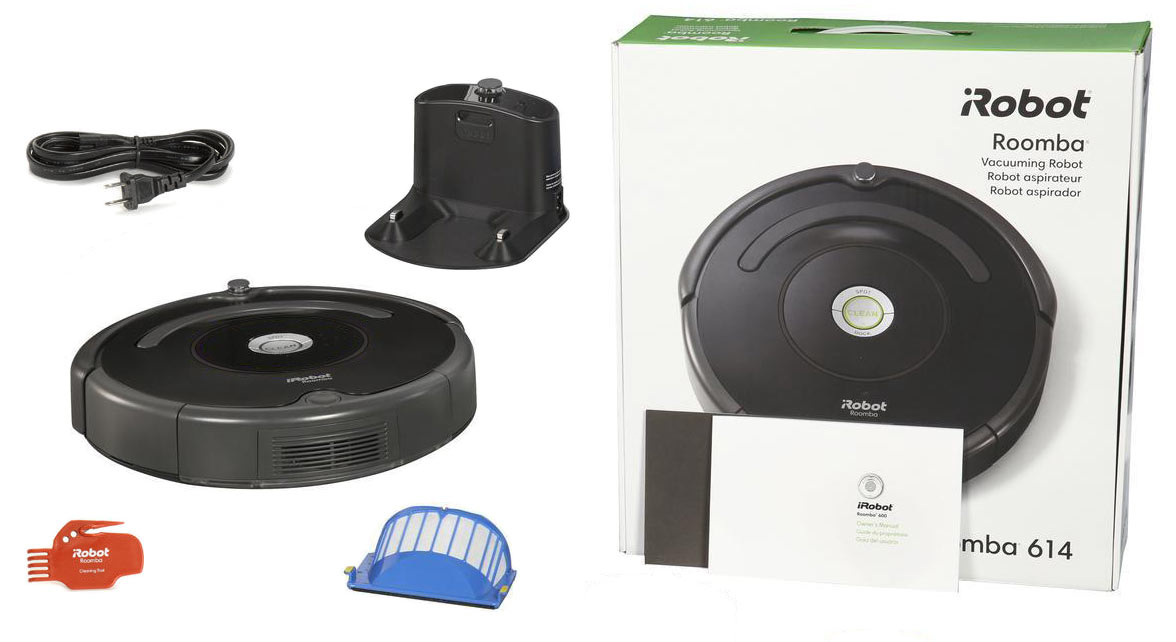 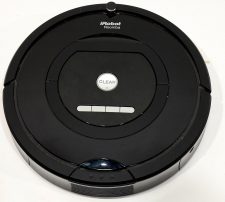 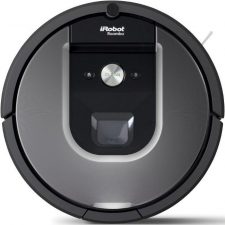 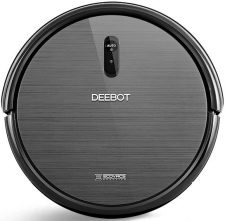 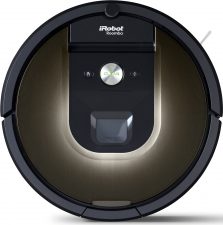 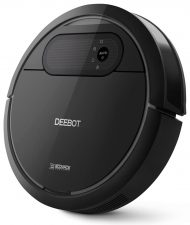 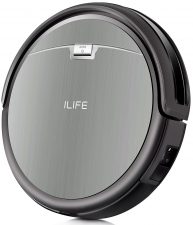