When you search for your next vacuum, don’t be fooled into believing that it’s all about the input power. Be sure to find out about its suction power (air wattage) and agitation abilities to get a complete picture. These will reveal what the machine can truly accomplish.

While many people check the wattage and amperage of a vacuum cleaner, few look for the suction power in air watts. The formula is:

Air flow is measured in cubic feet by the quantity of air sucked in 1 minute.

Vacuum suction, or “water lift,” refers to how many inches of water can be pulled up the vacuum’s tube.

Suction power is greatest somewhere in between such opposite situations.

The suction power in air watts reliably and consistently represents cleaners’ abilities to suck dirt and dust. Suction power is measured in watts just as the input power, but its highest possible value is always lower (in vacuum cleaners typically 5-6 times lower) than the input power (of the fan motor). Larger fans and more powerful motors tend to be more efficient than smaller and less powerful ones. Actual input power depends on momen-to-moment working conditions and can be lower than the power rating (maximum input power) specified on the cleaner.

Most brands don’t tell you their suction power and even if they do, it’s usually the suction power of the fan without taking into account suction loss due to filters, tubes, and hoses, so we can only estimate the actual in-use suction power in our review.

Another major factor in a vacuum’s cleaning ability is the quality of the brush roll. They are most commonly made of plastic, metal, or wooden cylinders, with synthetic bristles attached. These rotate at high speeds, moved by either electricity or airflow, to loosen dirt and push it upwards (primarily from carpets) so that the suction can pull it into the vacuum cleaner.

A motorized brush roll can be powered directly by the fan motor (in uprights with direct suction) or by a separate motor. An air-driven turbine is powered by the airflow, which reduces the suction power for cleaning. This is a poor use of power because an electric motor can spin the brush roll with minimum energy loss while creating suction power typically requires several times more electrical power.

Almost all upright and stick vacuum cleaners have a motorized brush roll. As do most robotic vacuums. In robotic vacuums the roller brush (along with side brushes) contribute more than the suction to the vacuum’s cleaning ability, because the suction of robotic vacuums is limited by the relatively low electrical power provided by their batteries. Most robotic vacuums do not suck dirt directly from the floor effectively, and so use suction only to transfer agitated dirt from the brushes to the dustbin. There are even models without (or with optional) suction. They could more accurately be called sweepers. As for other vacuum types, around half of all handheld vacuums have roller brushes, while canister vacuums rarely come with a brush roll option.

When you deep clean carpets, brush rolls are valuable. If you clean mainly hardwood floors, then the brush roll is not so important. Moreover, it can scratch floors with a gentle finish.

Judging a vacuum by its power rating (in amps or watts) is very common. The following formula relates these measurements:

This determines the maximum current a vacuum can use (by all of its components) during operation. Obviously, the majority of the power is going to the fan motor. The remainder is divided between the light bulbs, brush roll if it’s motorized, and any indicator lights.

Actual input power changes during operation depending on working conditions, especially on the nozzle opening. The higher the airflow the higher the power consumption. It is most convenient when cleaners’ motors consume maximum power with and get maximum air-flow when the nozzle is fully open and the bag or dustbin is empty.

The most effective cleaning happens when suction power has its maximum on one particular nozzle opening. Note, that the input power of the fan motor in such a convenient vacuum is not necessarily at its maximum value under the same conditions.

The maximum amperage for any appliance in the US is 12. And in convenient vacuums the amps cannot be used fully for suction because maximum suction and maximum input power may be reached under different operating conditions.

If you see a product specification that refers to something higher than 12 Amps or 1440 Watts, these most refer to a performance rating created specifically to make the consumer believe it’s a more powerful machine.

If you want a more accurate idea of how powerful a vacuum is, look for the amp rating of the motor itself instead of the machine as a whole. Keep in mind, a vacuum that consumes more electricity isn’t necessarily the best for cleaning. However, when comparing identical vacuums where the only difference is the motor power, the most powerful one will have the greatest suction power.

The longer the path of the air through a vacuum, the more suction will be lost. Every change in the direction of the airflow reduces suction as well. So cleaners with short and straight paths for the air to take, from the intake port to the exhaust port, lose less suction. The lowest suction loss comes with upright models with direct suction, and most handheld models. The most suction loss happens in canister vacuums and some upright models–those whose hose loops around the vacuum body to the roller brush.

Uprights with direct suction have very short and straight airflow paths with minimum suction loss while other models can have much higher suction loss, comparable to that of canister models. 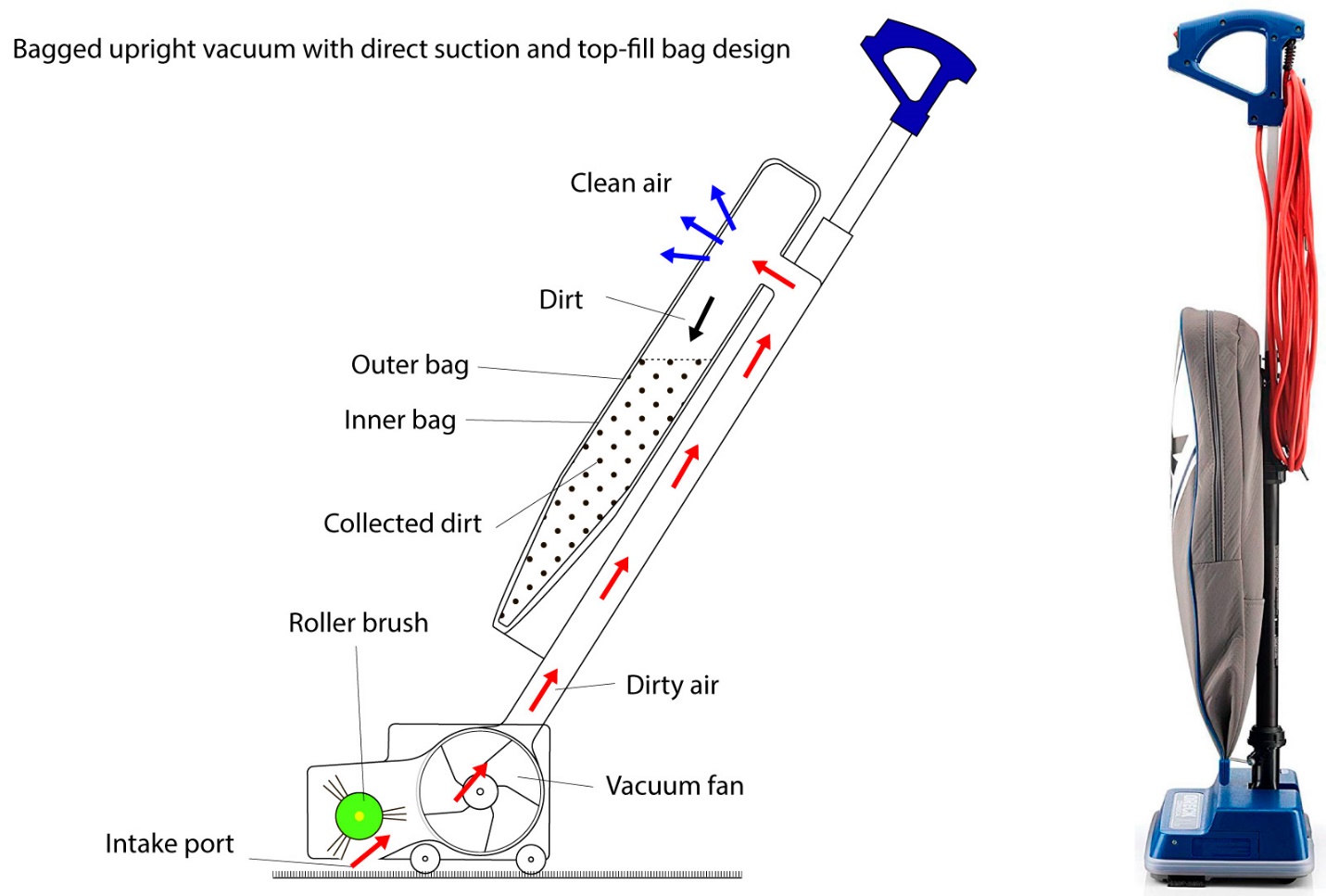 In upright models with direct suction, the dirty air from the intake port goes right through the fan, then tube, and into the bag. These models equipped with 4.5 amp motors can provide suction power comparable to indirect suction models with 12 amp motors.

Most upright vacuums and all bagless models use indirect suction. All uprights have roller brushes that touch the floor, motors with the fans above them, and dustbins on top. In different cleaners, the air can go different ways from roller brush to dustbin and dustbin to fan.

There can be a hose loop that sticks into the roller brush and goes above the vacuum to the dustbin or a short tube in the rear of the vacuum that connects the roller brush with the dustbin. Models with the hose loop lose a lot of suction, and can be compared with canister models. All the lift-away models have such a similar design; they can be described as canister vacuums with the possibility to lock the canister on the extension wand. So they have the same airflow path as all the canister vacuums with corresponding suction loss in the hose.

The design with the most suction loss has a hose loop and outlet hole on the top of the dustbin.

The design with least suction loss has a tube from the roller brush to the dustbin and an outlet hole on the bottom of the dustbin. 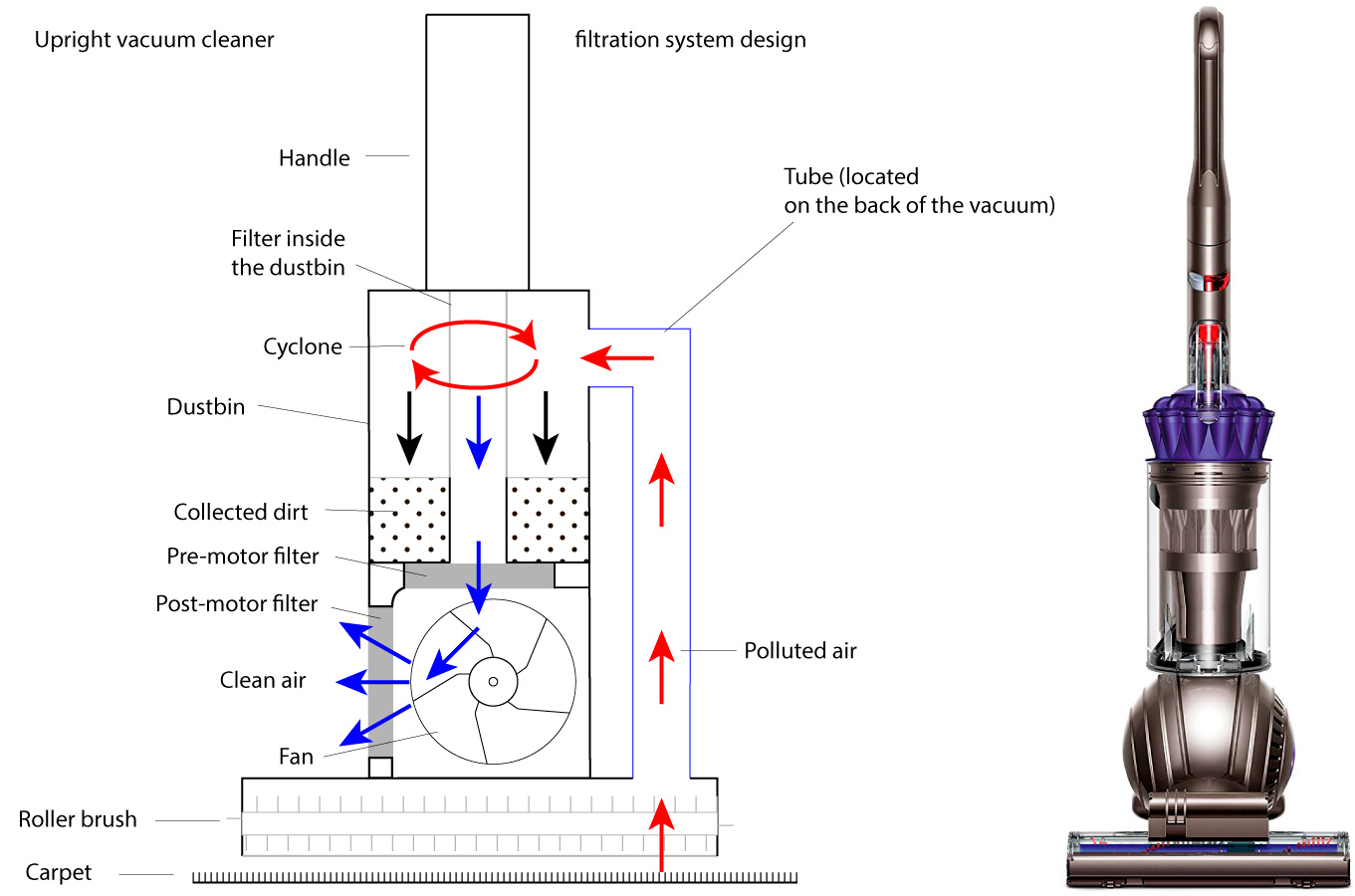 In most handheld models there are no tubes or hoses; the dirty air from the intake port goes right into the dustbin, then passes through the pre-motor filter, comes to the fan, and then exits through the post-motor filter. The path is very short and straight with minimum suction loss.

Airflow inside canister vacuums goes the same way as in most handheld models, which is fairly effective. But before air comes into the vacuum, it goes all the way through the long wand and hose, which significantly lowers airflow.

Robotic vacuums usually have compact designs with short and straight airflow and minimum suction loss, like in handheld models.

Even brand-new mechanical filters reduce airflow. And the better the filter the more suction loss. That’s why using any vacuum with an HEPA filter requires more air watts than otherwise similar cleaners without filters, in order to clean effectively.

Several factors can impede suctioning power and many can be easily fixed. A full bag or dustbin reduces suction. However, this effect is not significant in a vacuum equipped with cyclonic filtration, which was designed to provide powerful suction even with some dirt in the bin.

In addition, dirty or clogged air filters reduce air-flow. Most filters are hand-washable or can be replaced. Taking preventative measures to keep them clean will keep your machine suctioning and cleaning at optimal levels.

Sometimes dirt and debris can get caught in the hose of a canister vacuum. If this is reducing power, simply remove the hose and purge the obstruction.

If the vacuum features a rotating brush, its tiny fibers disrupt the dirt on the floor to maximize cleaning efficiency. The brush forces the debris into the airstream, which carries it into the dustbin or bag.

The dirt and debris are stored in the cleaner’s bag or dustbin. Air can pass easily through the filter and bag, and out the exhaust port, but the dust is trapped inside.